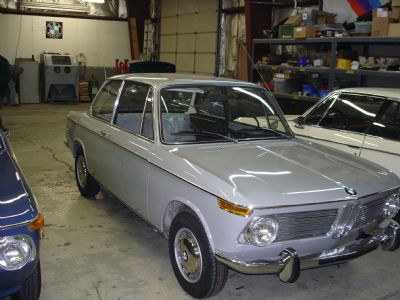 About this restoration : I found Rhino, a 1968 BMW 1600, on eBay in the spring of 2004. The listing included quite a comprehensive compilation of photographs, with many close-ups. The car had been side-swiped on the driver’s side and punted slightly in the left rear. Otherwise, the photos revealed that the claimed 33K miles by one Albuquerque, NM, owner until 2003, were quite possibly the real thing. Photos further revealed no rust, fairly shiny paint and a decent looking interior.
I took a chance and bought the car for $2,500. Then I had to figure out what to do with it. I had never met nor spoken with Don Dethlefson but had read articles about Don and his restoration work, and gave him a call. Don was enthusiastic about the prospect of restoring the 1600 and offered to swing by Albuquerque and pick up the car on his way back to Lake Bluff from an event (Oktoberfest?) in California. Don happened to have an empty spot in his trailer.
Don picked up Rhino in early July and called me from Albuquerque. Turns out that Don knew the seller and he reported that the car appeared to be a gem in great original condition, obviously needing body work and paint. I was optimistic.
During the process of restoration I learned that the guys in the shop had given the car a job name, Rhino, and would report their labor on time sheets under “Rhino.” The name just stuck.
Rhino came together very nicely and beautifully. It drives tight and smooth, and is a lot of fun. Rhino lives at our lake house in Door County, WI, and has made appearances in the Egg Harbor Fourth of July parade a couple of times.