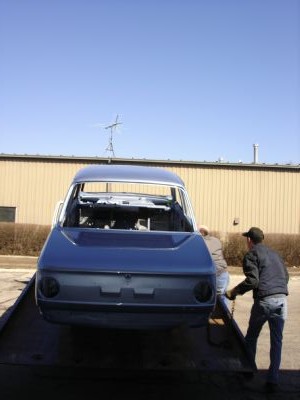 About this restoration : Chuck had read about 02’s and in 1972 checked them out at his local BMW dealer. He liked the new Fjord Blue car he had seen but while he was thinking about it, the car was sold to an elderly couple.

Six months later the salesman called him, the elderly couple did not like the car and had returned it to the dealer. Chuck bought it on the spot and drove it for many years. A divorce caused the car to be left behind and several more years passed when Chuck’s ex-wife offered him the car back. It had fire damage inside the engine compartment and was fairly well used. Into the garage it went were it sat for many more years, Chuck always having the intent to some day restore this gem.

Chuck and his 2nd wife Bobbie have been very active in their local BMW Chapter and when luck came their way, The Werk Shop was called upon to do a complete show car restoration. They have won many first place trophies and take great care of the car that has been in Chuck’s life for almost 40 years.