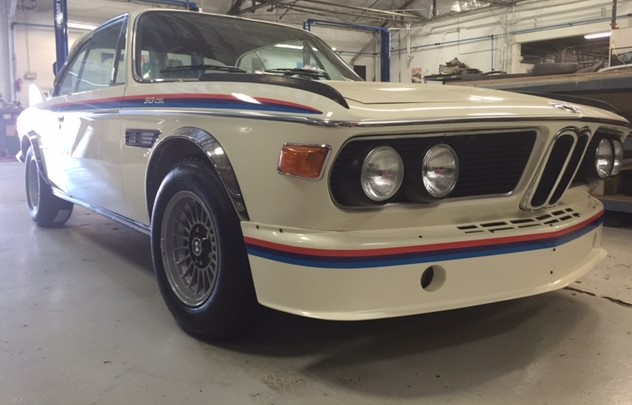 It’s mid October, 2013 and we get forwarded an eBay listing from our customer/collector in Kansas. He has found a 3.0CSL “Bat” for sale at a very reasonable price. However, the original engine is gone. Since matching numbers is where it’s at today, for top value in rare collectables, we did not give the car much thought. Until… our customer mentioned that 10 or more years ago, the car had been built into a track car with upgraded engine and track suspension. Along with that comment he mentioned the name of the shop that did the work and we know those folks well. Also, knowing they never throw anything away, we figured they might still have that original engine. Sure enough, a quick call confirmed it was on a shelf but still had an open invoice from ten plus years ago. We then quickly contacted the seller as the bid was stuck and going nowhere. After learning the reserve number we offered to buy the car for an amount above the reserve. Finalizing the purchase was no easy task as it involved a trip to Leesburg, VA; not only to see the car and confirm the sale but another two days had to be spent dealing with a Lien that had been placed on the Title along with a few other unpaid bills. All said and done and after an extensive high quality restoration, this car and its’ original engine are now back together, along with all factory stock parts. Another rare BMW has been preserved!