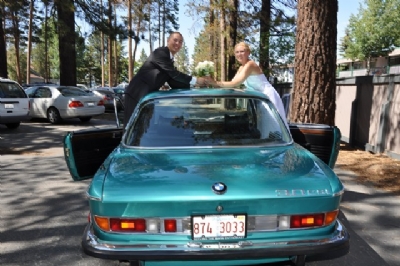 About this restoration : Brian’s father had a passion for BMWs and Porsche’s. After selling a 911 SC Targa, he bought this 3.0CS Coupe in 1991 with the intention of restoring it, unfortunately, he passed away before the project could begin. Brian and his brother inherited the car after it had been sitting on a dirt floor in a barn in central Illinois for seven years. They decided, as a tribute to their father, they would fulfill Dad’s dream and sent the car to us. It did not run and had extensive rust damage when it arrived at the shop. After the restoration was completed, Brian’s brother’s interest changed and he sold his half back to Brian, who then moved to Las Vegas and had the car shipped there. Recently, Brian drove the Coupe to Lake Tahoe for his wedding (see photo) and now does many CCA events with the Sin City Chapter. You’ll also see Brian driving a sweet 2002 that is loaded with rare Alpina parts.