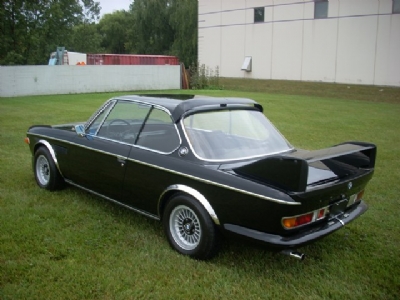 About this restoration : Jon has been a long time BMW fan having driven or owned most of the “M” cars. When he sold his manufacturing company, he decided to begin to assemble a serious BMW car collection.

After visiting our shop, the decision was made to find a “Batmobile” and a 2002 Turbo and restore both to very high standards.

The Werk Shop began the search for a rare Bat and found the donor car in a Virginia collection having originally entered the US when Dick Barbour purchased the car out of Italy with the idea of racing it. The car was Golf Yellow, complete, but showed many signs of racing damage. The restoration took 1-1/2 years to complete and is stunning as totally stock and painted in Black, without the side CSL marker stripe. It now resides in Nova Scotia along with Jon’s other BMWS.