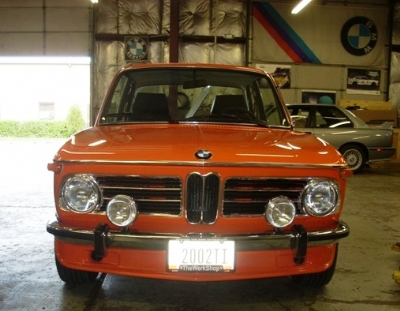 About this restoration : Chris writes:
I had bought my first 2002 in 1984, an Inka Orange 1971 2002 from a roommate’s step-mother in Columbus ,Ohio. The car had a lot of rust. I ended up driving the car out to Denver and then to Arizona, and really bonded with it.
I ended up selling my BMW in Phoenix which wasn’t easy as it had no AC or sunroof.
Recently, I decided to find and restore another 2002tii, so I searched on the net and found a 1972 Black 2002tii, and bought it. The car ran rough and had a lot of rust that did not appear in the internet photos. I put 5K into the car and it still ran rough.
So then, I found the Werk Shop, and decided to have them restore my 2002tii the right way. I thought the drive to the Werk Shop from Cleveland, Ohio was going to be about a 6 hour trip. So last summer I ventured out on my journey, and it was a longgggg trip. During the first continuous hard rain, there was leaking from the sunroof and through the open driver’s window as the heater was on and no air conditioning. It was hot and wet! I finally arrived at the Werk Shop with my wife and three kids following an hour behind if needed.
Now my 2002tii is safely in the hands of the Werk Shop, being restored to its former excellence. I can’t wait to get into my new Inka Orange 2002tii and drive the rubber off the tires. They tell me it should be ready by this summer. Yahoo!!!